I check my Hackintosh computer’s disk with Disk Utility every now and then to make sure there are no problems. Usually it says the disk is okay. This time it said “error: drec_val object (oid 0x8f62a): invalid type (0). fsroot tree is invalid.” Disk Utility also told me that it couldn’t repair it. I found some discussion boards online which say the only solution is to reformat the disk and restore from backup.

This is a problem.

I panicked for a moment until I remembered this is why I have a backup. Multiple backups, in fact, all of them current. I chose a cloned hard drive that I keep up-to-date with SuperDuper!, I booted from it to make sure it worked, then I reformatted the SSD and re-cloned back onto it. Four hours later (SuperDuper! takes a long time to copy 300 gigabytes of data over SATA), I rebooted from the SSD and all was well, and Disk Utility had no more complaints. This is how I spent my Sunday afternoon.

I have the annoying ability to fix computers by touching them. Annoying because there was once when I’m at work and Jill calls me from home, her computer’s not printing, she knows how to check everything and she’s checked everything several times and it’s just not working and she needs to print. So I come home at lunchtime and I turn on the printer on and it works, first try, and her glare shoots daggers through me.

Jill’s friend Sara visited us recently. She knows that I fix computers as a hobby. “I’ve got a challenge for you,” she said, handing me a MacBook Air laptop; and as I opened the lid I immediately saw why.

The computer had been run over. Her son found it in a gas station parking lot beside a highway. The display was crushed; the force of its bezel pressing down around the keyboard had bent the frame. The glass-coated trackpad was shattered. The bottom of the case was rippled with the impression of whatever gravel it was on when it was run over. Amazingly, though, it turned on – a touch of the power button made it chime, the keyboard backlighting worked, and the display lit up in a mix of black and white that looked like an oil slick, completely unreadable. So I had no idea if it was trying to function, or if it was brain-dead. First step in diagnosing it would be to connect it to an external display, but I didn’t have a Mini DisplayPort adapter. I ordered one immediately from Amazon. But I was itching to see just how functional this poor little rescued thing was.

I managed to remove the bottom of the case. This was a MacBook Air (13″, Mid 2013), with an i5 processor. I was completely astonished to see that the logic board (with attached SSD) and battery looked to be mostly intact, as if the rest of the machine had sacrificed itself to protect its brain.

I decided to post on our town’s forum on Facebook, asking if anyone had any dead or disused computers I could have for parts. Amazingly, one woman responded that she had a MacBook Air she could give me. Even better, when I picked it up from her, she told me that it was dead and wouldn’t boot. All she asked in return was that I retrieve her photos from it, if there were any way to do that.

So now here I was with two MacBook Air laptops: a crushed one whose logic board was just about the only piece that wasn’t broken, and a looks-good-as-new one whose only problem was that the logic board was fried. This could mean only one thing: it was time to Frankenstein a new computer out of these two.

I spent a few hours on a Saturday taking both of them completely apart. (Thanks to iFixIt for the excellent guides.) From the crushed one, I used the upper case (with the keyboard), the logic board and SSD, and the battery. (I did my best to unbend them gently.) The donated one was an earlier model (13″, Mid 2011), and from it I took the display, trackpad, and case bottom, hoping Apple hadn’t changed the connections or the screw holes between 2011 and 2013.

And it worked! The rebuilt laptop seems to work flawlessly (aside from some of the function keys no longer having the same function, like volume up/down – it seems that using the 2011 trackpad makes the computer read its 2013 keyboard as if it were a 2011 keyboard, which is arranged very slightly differently).

I hadn’t taken any photos, but I decided now was a good time for that. 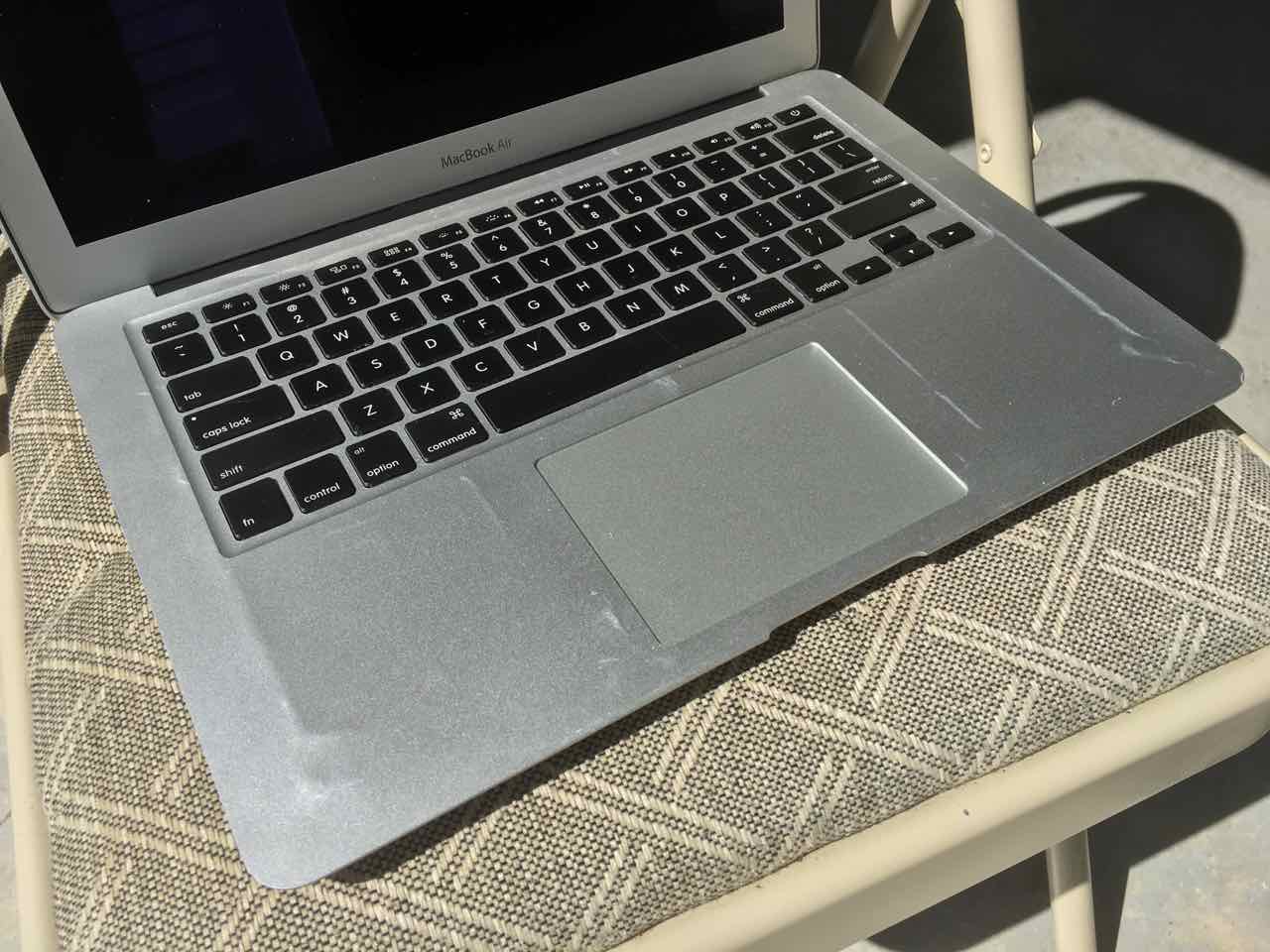 The crushed and mostly un-bent upper case after I replaced the display and trackpad. The wrinkled lines are where the metal bent against the components inside the laptop. 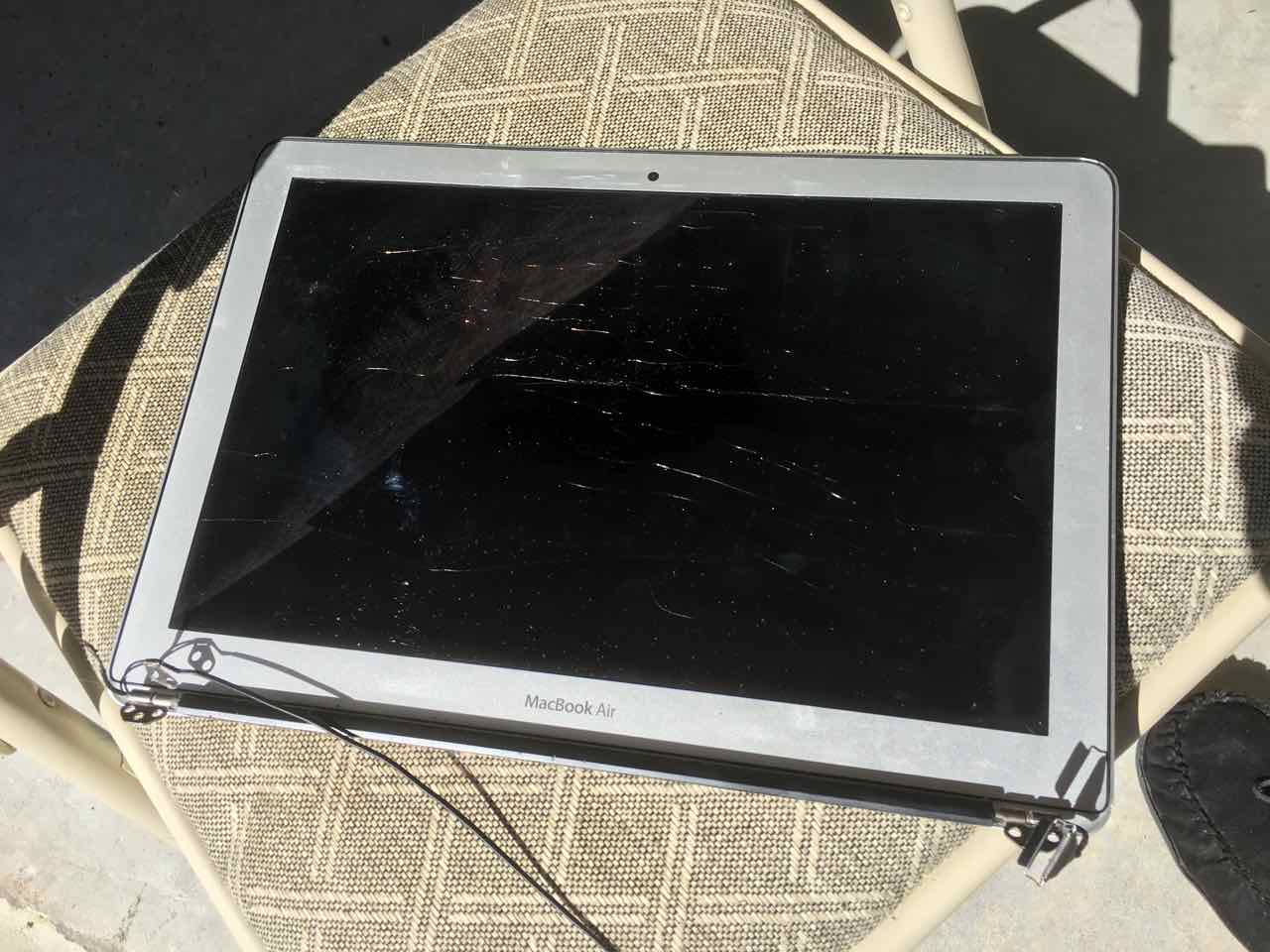 The original display, shattered and bowed. 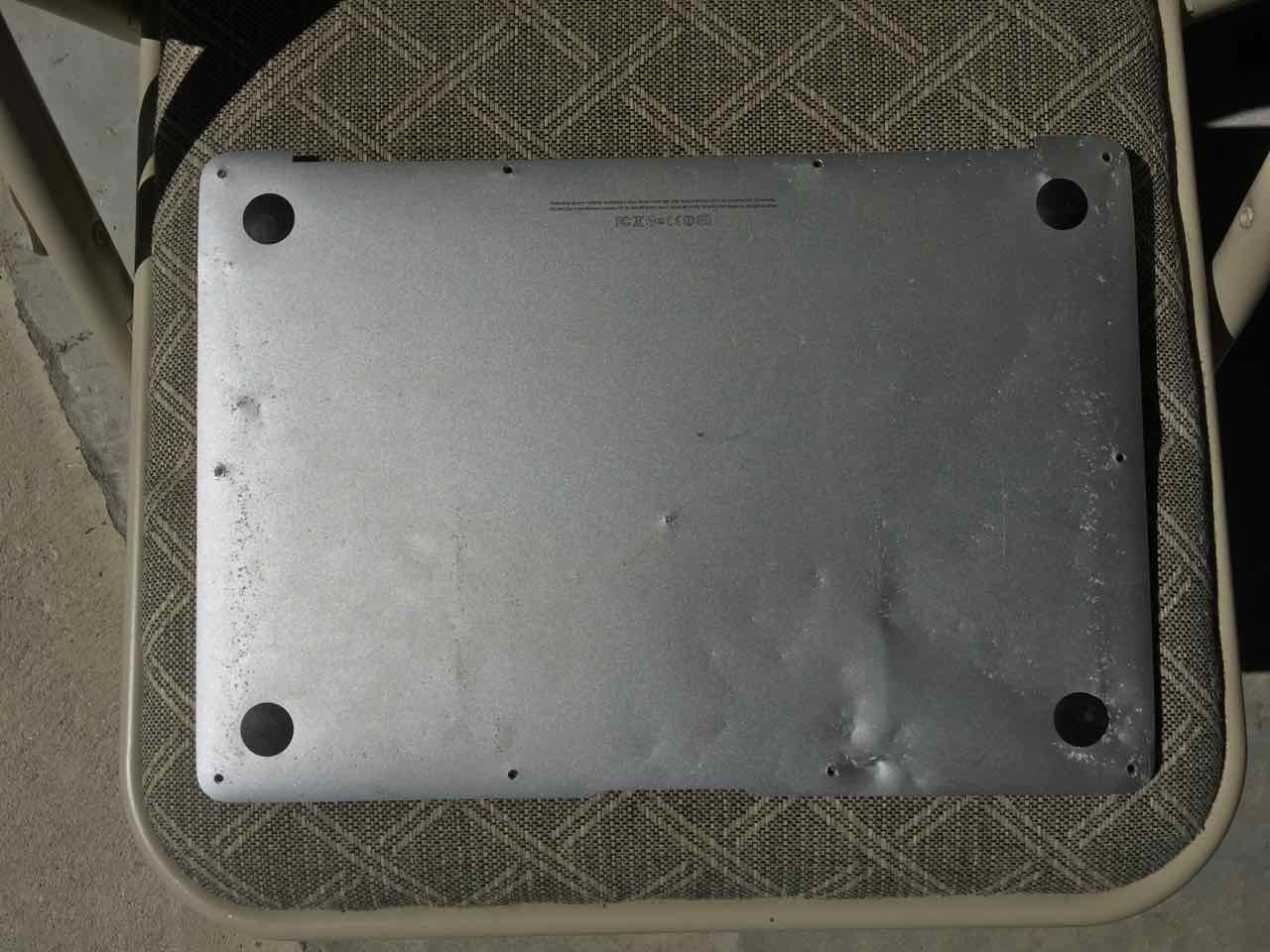 The original case bottom, crumpled, and punctured in the middle.

Booting it up brought me to the login screen for somebody named Mark. I didn’t know his password, of course, but I wanted to be able to log into the computer so that I could run SuperDuper! and clone its data to an external hard drive and return it to him. I tried booting into recovery mode, opening Terminal, and running passwordreset, but that only asked me for his Apple ID password, which I also didn’t know – but it did give me his Apple ID email address, so now I had a way to contact him.

I looked for any other way to get login access on the laptop, and I found a trick that I’d definitely call a security hole: boot into Recovery, launch Terminal, and delete the file /var/db/.AppleSetupDone. When you reboot the computer, it’ll go through the new user setup and create an account for you with admin privileges – while leaving the rest of the data on the computer intact. I did this, and was surprised and somewhat horrified that it let me right in. I cloned the data with no further problems, and then I emailed Mark to let him know where his computer had been found and to offer to get his data back to him. (That was a few weeks ago. I haven’t heard back from him.)

Meanwhile, the woman who asked me to try to recover her photos from her dead MacBook Air? Turns out that computer uses a standard mSATA SSD. I bought an enclosure from Amazon for a few dollars so that I can connect the SSD to a computer over USB. All of her data on it is intact and I’ll be able to return all of it to her.